If you’re anything like me, you may really enjoy a leisurely, more indulgent breakfast on the weekends. I’m a big fan of pancakes, French toast or an omelette. One thing I’m not such a fan of: the amount of fat and calories that tend to come along with these delicacies. Eggs Benedict is great, until after you’ve scooped up the last bit of hollandaise and the food coma begins to set in.

To avoid this feeling, my fiance, Sean came up with a much better solution to the indulgent, yet still healthier breakfast we crave on the weekends: the healthier open-faced breakfast sandwich.

As I said in one of my previous posts, protein (and getting more of it in my diet, especially on the weekends when things aren’t as regularly planned) is a big focus of mine right now. My coach has given me the amount of protein, carbohydrates and fat grams I need to aim for everyday, but otherwise told me to do what I want in terms of getting there. That’s cool with me, and in case you’re wondering, this type of dieting is called “flexible dieting” or its more trendy moniker “IIFYM” (if it fits your macros). But that’s for another post…

Anyway, we were craving a good breakfast, I needed to make sure to get some quality protein in my diet and lately, Sean’s been a big fan of the egg sandwich during the week, so he decided to take the idea and make it more decadent and akin to the hollandaise-laden dishes you might get at your favorite breakfast spot, minus the heart clogging properties.

And thus, the healthier open-faced breakfast sandwich was born. It doesn’t need anything fancy either, just some nice buns, eggs, ham and a few minutes of time. Revel in its tastiness and feel smug at the same time for still eating healthy on the weekend.

Who needs hollandaise when you’ve got yolk? 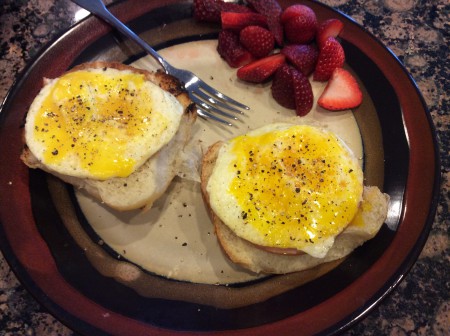